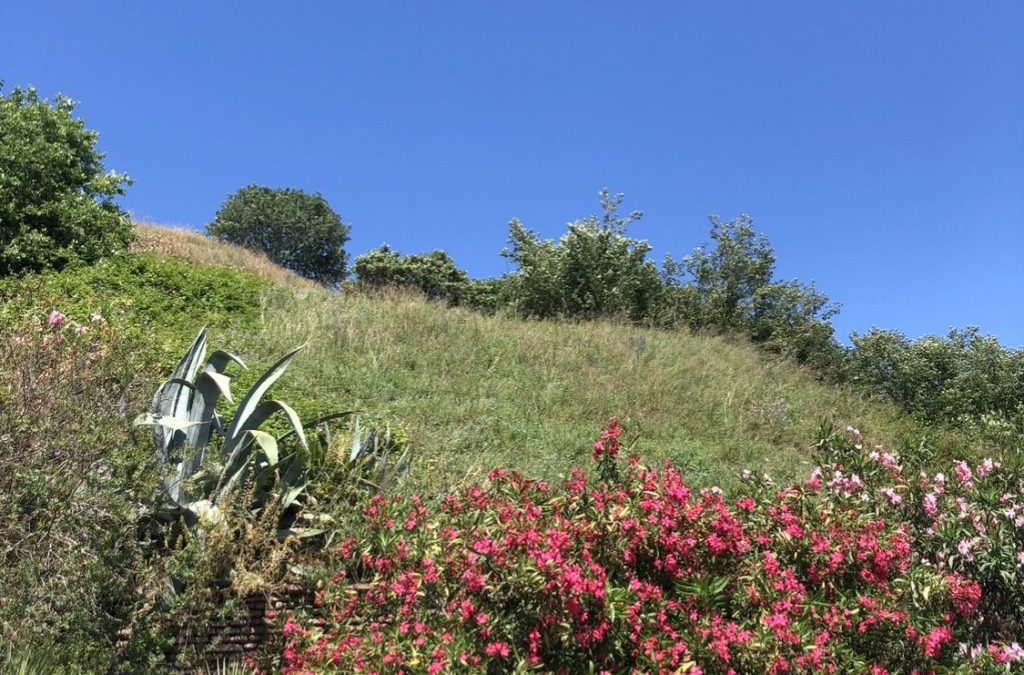 Seven weeks ago today I was making pasta e fagioli when an unexpected (at least by us) announcement from the Prime Minister began the national quarantine. That first week was particularly odd: while Italy was shut down, almost everyone else was carrying on as usual. Every image of a full stadium, a big concert, or a crowded pub felt incredibly unsettling, like rewatching the beginning of a disaster movie while also being inside a goldfish bowl.

Now we’re all in similar boats, and I imagine ordinary social interaction feels quite other to pretty much everybody everywhere. My phone with its chirpily blithe announcements reminds me of the Other Time – you are walking less this year than last! – keeps throwing up photos from various past events. Yesterday it told me that on 26th April, 2019 I was doing the Cocci e Carciofi tour that I run with my pal, Testaccio-based food writer Rachel Roddy. This spring’s three dates have, obviously, all been cancelled.

We do a few jaunts in Testaccio for small groups every year. The spring version is Cocci e Carciofi: sherds and artichokes. We all meet in Testaccio Market (destined for all eternity be called the “new” market) for coffee and a chat about how in Testaccio food and history are inextricably intertwined; from its ancient port to its nineteenth century abattoir. We wander through the market, tasting delicious things and visiting Rachel’s favourite stalls, and learning how to tame artichokes. We walk through the long defunct abattoir, admiring the industrial archeology of the nineteenth century city’s underbelly. We wander past prickly pears and bouganvillea, along the least urban of streets where a cockerel perpetually crows to no one before meeting a chap with a key for special private access to the usually closed Monte Testaccio, a hill made from an estimated fifty-three million olive oil amphorae. A Roman landfill site.

Crunch crunch we go up the hill of broken pots, pausing to pick up interesting bits (and then put them back, of course): a handle here, a whopping great thumb print embedded in terracotta by a momentarily distracted potter nineteen centuries ago there. At this time of year we might find wild asparagus, and Roman wild mint which is given away at markets when one buys artichokes to make the stewed carciofi alla romana. We pause at the top to admire the extraordinary view, it is an unusual angle: picturesque domes and pines, but also decommissioned gasworks.

Back down the hill we wander, take a glass of fizz and a fried artichoke to whet the appetite, and then repair to one of Rachel’s favourite trattorie where we have a slap up lunch featuring artichokes umpteen ways, the wine flows, and delicious things keep arriving until no one can manage any more. It’s extremely jolly, and everything that we both wanted it to be when we first had the idea, properly convivial and joyful. I can’t wait for us to be able to do it again.