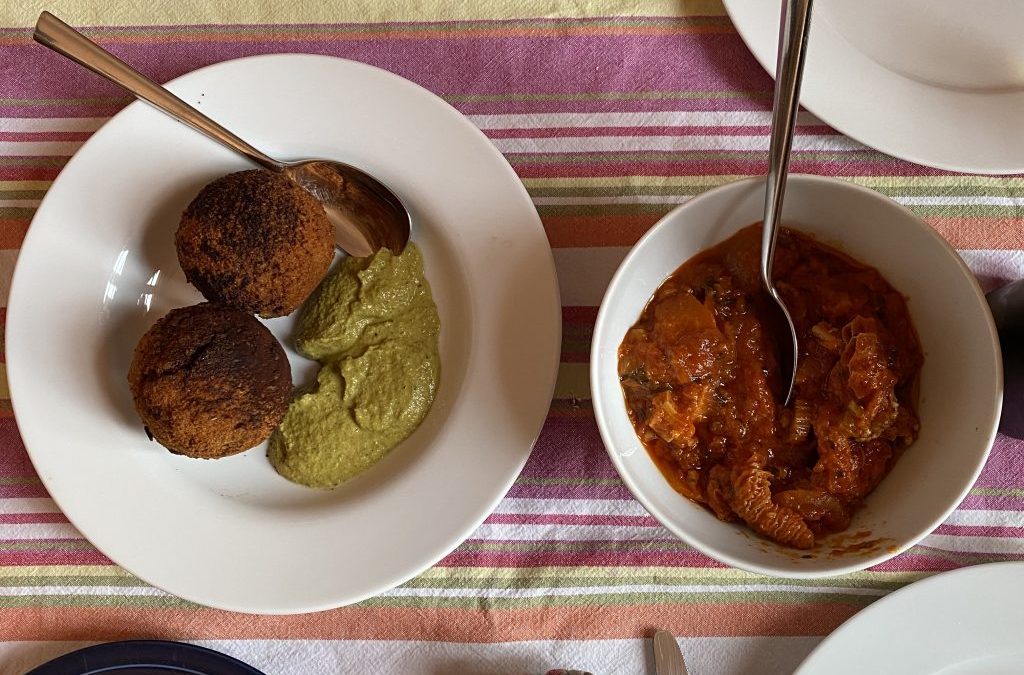 Today is the third Sunday of the Roman Quarantine. And because it’s Sunday we had lunch. After all standards need to be maintained, and though this all feels like punishment we haven’t in fact been bad. So, following the Instagram example of my pal Hande, we ordered a delivery from SantoPalato, San Giovanni’s all-singing all-dancing modern trattoria. Rome has some pretty superior delivery food in this bizarre time, and though I love cooking (there are lots of #quarantinesupper posts on my Instagram account) a change is also more than agreeable.

As I contemplated what we should order on Thursday (Sunday lunch is a serious business, not to be undertaken without forethought), I was only too aware of the luxury of the situation. At a time when so many people are unwell; those working to save them are in often dangerous and impossible situations; when people in violent homes are effectively trapped; those with mental health issues are suffering more than I can imagine; and when people who already had difficulty making ends meet are desperate, I am only too aware that despite the many inconveniences, and the (temporary, I hope) loss of my income, we are very fortunate indeed.

We ordered deep fried balls of slowly stewed oxtail served with lovage and peanut sauce (I love lovage: celery that’s been on an exotic holiday, slightly musty in a good way); trippa alla Romana (tripe with tomatoey, minty, pecorino-y sauce: don’t knock it til you’ve tried it); a whole tray of lasagne (we haven’t–yet–eaten the whole tray, I promise); and some spectacularly good greens. It was an excellent lunch, a super treat to punctuate this strange marking of ever more elastic time.

The odd mood of temporal and spatial claustrophobia in which we (the lucky ones, of whom nothing is asked other than we stay put and keep out of the way) find ourselves brings to mind the paintings of Giorgio De Chirico, who worked from a studio on piazza di Spagna (at number 31, above the pharmacy) until his death in 1978.

He founded the Metaphysical school of painting, and would inspire the Surrealists with his images of deserted Italian piazzas, wild perspective, and abandoned ancient sculptures. The paintings are pervaded by an oppressive air of impending menace. In the background he often shows (empty?) trains urgently pressing through to somewhere else. As much as anything else these could be the curious landscapes of our presently deserted cities. Abandoned during a pandemic, the sun relentlessly casting shadows which trace the passing of time with no one to see it; not even on the elegantly Baroque piazza di Spagna over which De Chirico once took his coffee. I wonder what he would have made of that.

In the UK the Trussell Trust organise food banks for people in need. They, and similar organisations across the world, need all the donations they can find at the moment.