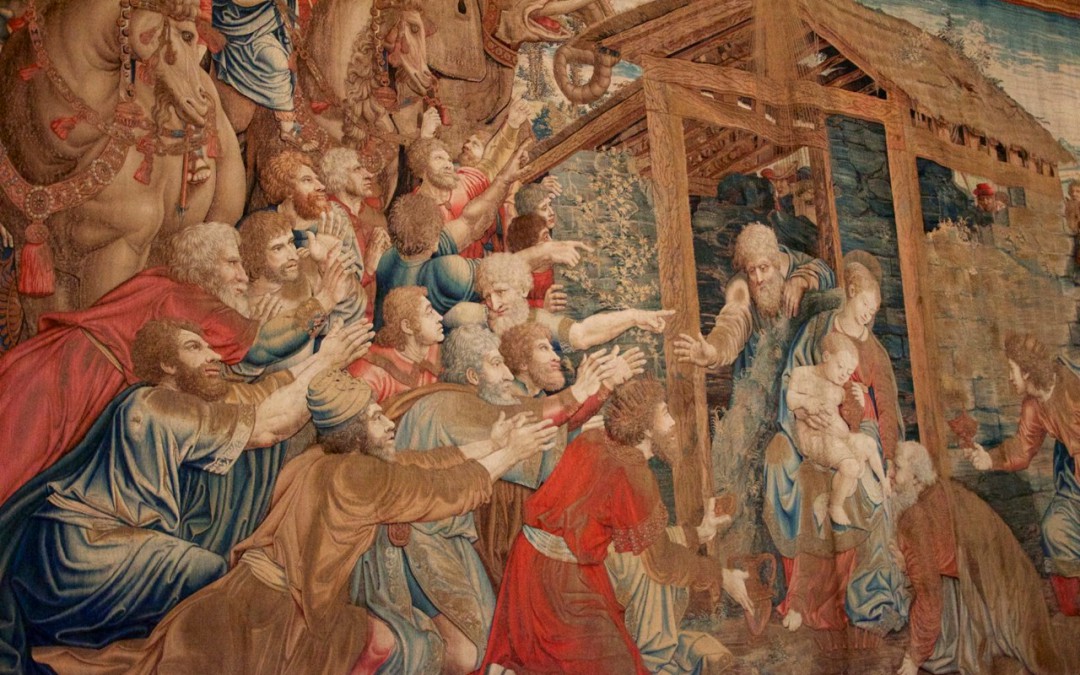 One wall of the Gallery of the Tapestries in the Vatican Museums is lined with wool tapestries telling stories from the life of Christ. They were woven in Brussels at the workshop of Pieter van Aelst in the early 16th century. Roman in design (they are the work of the group known as the New School, what remained of Raphael’s workshop after his untimely death), and Flemish in manufacture, they were part of an elaborate and expensive pan European project, befitting their role decorating the lower levels of the Sistine Chapel. They were first hung in 1531 over the painted faux drapery of the lower register of the side walls of the Chapel; astonishing to think that there was once even more to look at.

The second tapestry on the left as one enters the Gallery depicts the Adoration of the Magi and it is my favourite for a couple of details. Crowding around the rather large infant Christ (he is after all twelve days old) are a collection of exotic animals. On the left a couple of rather fabulous camels which were clearly designed by someone who had never seen a camel. They are, I often think, the result one might achieve if working from a description recounted by a slightly sozzled chap in a pub whose cousin had seen one.

Not terribly convincing camels (top left), a glimpse of a rather more convincing elephant’s trunk

In the background however is an altogether more anatomically (if not geographically) accurate beast: an elephant.

The artists who drew it had quite probably had the opportunity to sketch an elephant from life. A decade or so before the tapestries were designed an elephant called Hanno had lived, briefly and one imagines unhappily, in the Vatican. He was a gift to Giovanni de’ Medici following his installation as Pope Leo X from King Manuel I of Portugal (the perfect sixteenth century risposte to the question, “what does one get the man who has everything?”). Imported from the island of Sri Lanka, Hanno was ensconced in the Belvedere Palace (then the Papal summer residence above the modern entrance to the Vatican Museums). When he fell ill two years later, every effort was made to save the beast, including the administration of a gold enriched suppository. This, unsurprisingly, had little positive effect and Hanno expired on 8 June 1516. 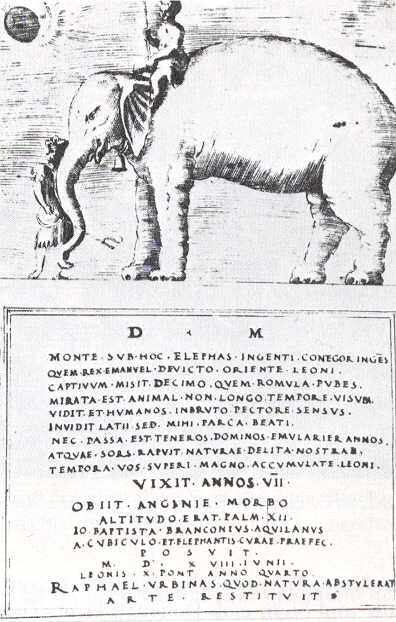 A sketch of the lost fresco by Raphael

The distraught Pope composed a verse, accompanied by a fresco painted by Raphael which sadly no longer survives:

“Under this great hill I lie buried
Mighty elephant which the King Manuel
Having conquered the Orient
Sent as captive to Pope Leo X.
At which the Roman people marvelled, —
A beast not seen for a long time,
And in my brutish breast they perceived human feelings.
Fate envied me my residence in the blessed Latium
And had not the patience to let me serve my master a full three years.
But I wish, oh gods, that the time which Nature would have assigned to me,
and Destiny stole away,
You will add to the life of the great Leo.

He lived seven years
He died of angina
He measured twelve palms in height.
Giovanni Battista Branconio dell’Aquila
Privy chamberlain to the pope
And provost of the custody of the elephant,
Has erected this in 1516, the 8th of June,
In the fourth year of the pontificate of Leo X.

That which Nature has stolen away
Raphael of Urbino with his art has restored.”

The story is told beautifully in The Pope’s Elephant by Silvio Bedini.

This tapestry is seen on my Vatican City private tour.

The Gallery of the Tapestries, Vatican Museums, viale Vaticano