Eternal acanthus and the apse mosaics of San Clemente 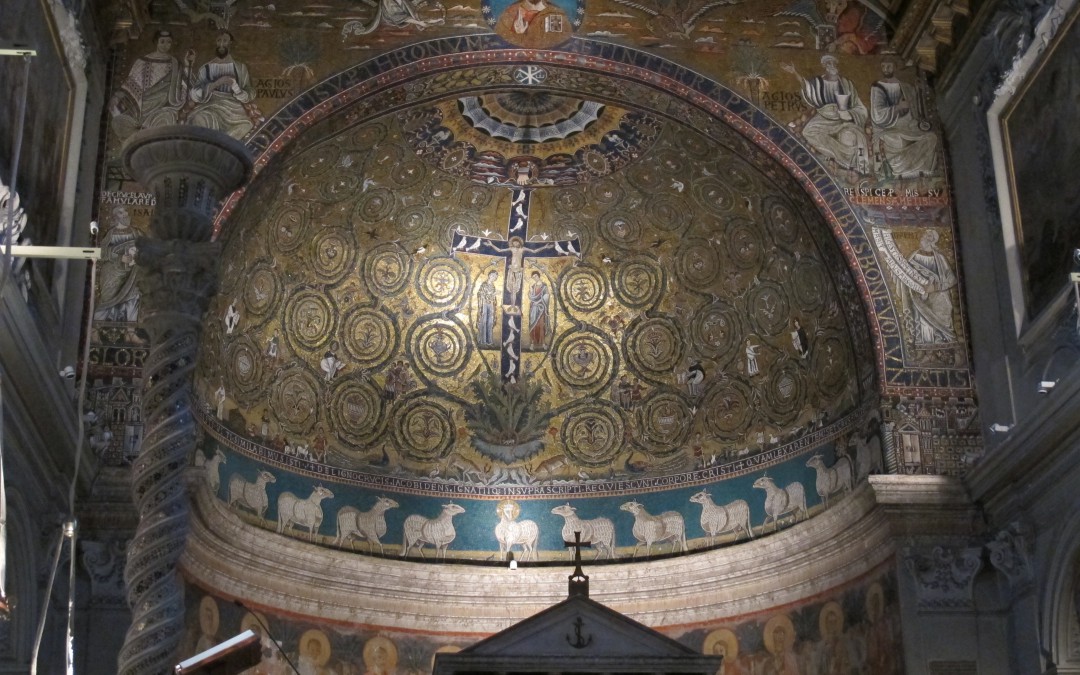 It also serves as a testimony to the most maligned of millennia, that which we still call either, dismissively, the “Middle Ages” or, pejoratively, the “Dark Ages”. A thousand years of history are brushed away in two words. As if they had only existed in function to that which had come before and that which would follow. From the lofty heights of the Renaissance, scholars gazed across to the equally lofty heights of the Ancient world, ignoring the benighted trough they imagined between the two.

In the introduction to his “Lives of the Artists” (published 1550) the foundation stone upon which, whether we like it or not, the history of art is built, Giorgio Vasari set this tone in speaking of Gothic architecture. It was, he said:

“… of vastly different proportions to both the ancients and the moderns. … which in [Gothic] hands became monstrous and barbaric, forgetting all order; that it might be more accurately called confusion and disorder, having put in their buildings, so many as to have infected the world, slim and twisted columns, which cannot have the strength to support the weight, no matter how light it be.”

But despite Vasari’s distaste for almost everything built after Constantine (died 335) and before Alberti (born 1404), it is an extremely interesting period, especially in Rome, and one in which the art and architecture of the Ancient world was not so much abandoned as adapted. As I have mentioned here, here, and here, one of the elements of Roman art to survive into the city’s Christian history was the art of mosaic.

Entering San Clemente from the street, one enters the shadows of the twelfth century church, replete with the glorious apse mosaics of c.1120, their glittering gold tiles a million miles away from the faux gladiators and tawdry souvenir stands at the end of the road.

In the centre of the mosaic we see a symbolic crucifixion; the cross far larger than the figure of Christ around which vast doves, symbols of the Holy Spirit, roost. The hand of God reaches down from the jewelled heavens to complete the Trinity of Father, Son and Holy Spirit.

From the base of the cross an acanthus plant grows, its tendrils spiralling into seemingly infinite whorls; in this piece of medieval Christian art we see a reuse of ancient Roman symbolism. These ever generating shoots of the acanthus are symbols of fecundity and eternal life often found in Roman art, perhaps most notably at the Ara Pacis where they represent the prosperity of the pax Romana, the peace reached after decades of civil war under the reign of the first Emperor, Augustus.

This appropriation of pre-Christian iconography reminds us of the inescapable Roman-ness of the Roman Church. An atavistic impulse pervades; Romans were Roman long before they were Christian.