The Auditorium of Maecenas 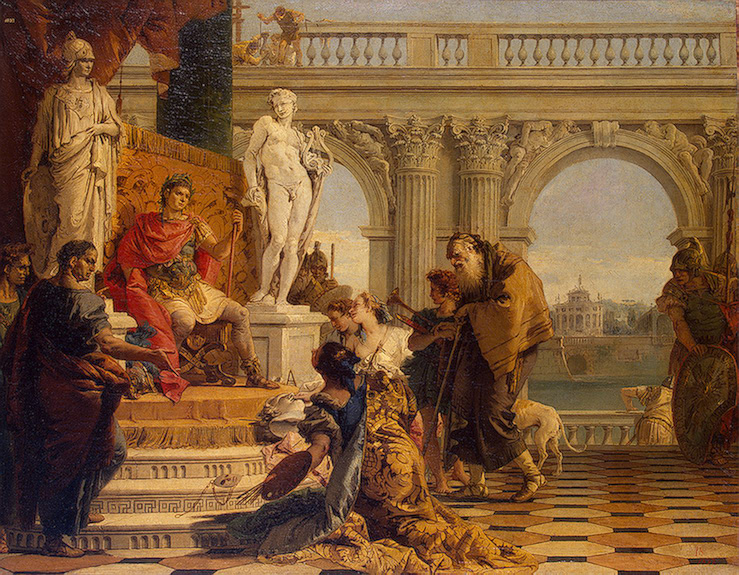 I was delighted to be asked to lead the first in Context Travel’s Rome series of “Tours in the Public Interest” last month at the Auditorium of Maecenas. It embodies the idea behind Context’s initiave which seeks to draw under-visited sites to public attention. In a city where a few places are so heavily visited, a panoply of gems are entirely overlooked; hidden behind railings, and only open to the public by appointment, the Auditorium is the kind of site that Rome residents can unwittingly walk past for years.

The “Auditorium” was discovered during the major building works which followed Rome’s creation as capital of the new Italian state in 1870. The Esquiline hill rose above the overcrowded and filthy winding streets of the medieval and Renaissance city. The site of the new Termini railway station – the very cutting edge of nineteenth century technology – it was the ideal site to house the new machines of state. Government buildings and ministeries grew up across the hill, and a sparkling new quartiere, centred around the Piazza Vittorio Emanuele (named for the new King) was hurriedly constructed to house the senior civil servants and mandarins piloted in from the north of Italy to set the wheels of the new bureaucracy in motion.

In 1874, as work to widen via Merulana and create the Largo Leopardi was underway, a partially underground structure came to light. Identified as one of the pavilions of the vast gardens of Maecenas, it was spoken of as an Auditorium. Maecenas was an independently wealthy scion of a noble family which vaunted its Etruscan roots. He served as a close advisor and ally of Augustus, and was also a great patron of the arts and it is in this role that he is chiefly remembered. He is a key figure in the formation of a cultural mood which characterizes, and indeed can be said to have in part sustained, the Augustan age.

His was one of the grandest of the elaborate villa complexes which spread across vast estates on the edges of town, and the first to develop on the Esquiline hill. Spread across the Esquiline, the complex was a patchwork of formal gardens, of partially open courtyards, and enclosed structures.

Cornucopia of Greek manufacture, 1st century BC. It once decorated the gardens of Maecenas. Capitoline Museums.

It was here that Maecenas’ entourage of poets gathered. At the heart of his circle was the poet Virgil, whose poem “The Aeneid” best expresses the spirit of Maecenas’ patronage as a fundamental tool in Octavian’s rise to his reign as Augustus. Perhaps commissioned by Augustus himself, in 12 books it details the meandering journey across the Mediterranean of Aeneas, hero of Troy. The story is not just an elaborate rendering of the ancient and illustrious origins of the city, however; Augustus was the heir of Caesar, and Caesar had claimed descent from Aeneas himself. This was thus the mandate of the new Emperor in poetry. How could his rule be called into question with such a provenance?

The “Auditorium” was imagined in the late nineteenth century as a place in which Maecenas had hosted readings of the poets for whom he was such an important patron. This identification comes in part from the theory that the stepped curved end of the structure was an area of seating. A later, albeit by no means certain, identification has suggested instead that this was a semi-sunken dining hall, set into the hillside against the fierce rays of the summer sun. This identification as a summer dining room does not entirely remove the theorised “Auditorium” function, indeed in many ways it renders it more evocative; in this reading the curved stepped end, once clad in marble, gushed with water cooling the area while couches in the main hall saw Maecenas’ guests enjoying opulent meals, the walls on either side painted with architectural features framing landscapes, as if looking out onto the gardens beyond. At the end opposite the nymphaeum, the vaulted room opened on to a terrace which looked out to the Alban Hills in the distance. The very place where Aeneas’ son Ascanius had founded Alba Longa, where Romulus, legendary ancestor to Augustus, would be born. A splendidly fitting view for the diners as they were entertained with tales of Augustus’ illustrious origins in those blue remembered hills.

The curved end, once clad in marble. Variously interpreted as seating for an Auditorium, or as a cascade of a decorative fountain. Paintings in the niches show garden views.

The building acts a sort of Narnian wardrobe, drawing one far away from the fierce traffic and prosaic solidity of the nineteenth century Via Merulana, and into a wildly evocative past, on the cusp of history and legend.

This would make a super inclusion to an itinerary themed around Augustus, or as an addition to a tour based on the “Trojan Legacy”
By appointment only
Auditorium of Maecenas, Largo Leopardi